Return to my Astronomy page.

On Monday, August 21, 2017, the United States saw a total solar eclipse that crossed the entire country from Oregon to South Carolina. This was a not-to-be-missed event, so I schlepped my camera gear to the Santee Wildlife Refuge in Summerton, SC and hoped for the best.

The weather forecasts for the day called for partly cloudy until 10 AM, then mostly until 4 PM, then a chance of thunderstorms. Not very encouraging, but you play the cards you are dealt. So, I arrived at 6 AM, expecting the Mongol Hordes to invade the location I had chosen - the Santee Wildlife Refuge near Summerton, SC. For the first couple of hours, there were fewer than 10 cars in a field that was 400 x 50 yards in size. By eclipse time, there were over 400 cars parked there.

As predicted, at 10 AM the clouds increased. At Eclipse minus 20 minutes …… the clouds disappeared! We (that is the estimated 2,000+ folks who eventually showed up) had a cloudless sky, and as seen below, a perfect eclipse experience. 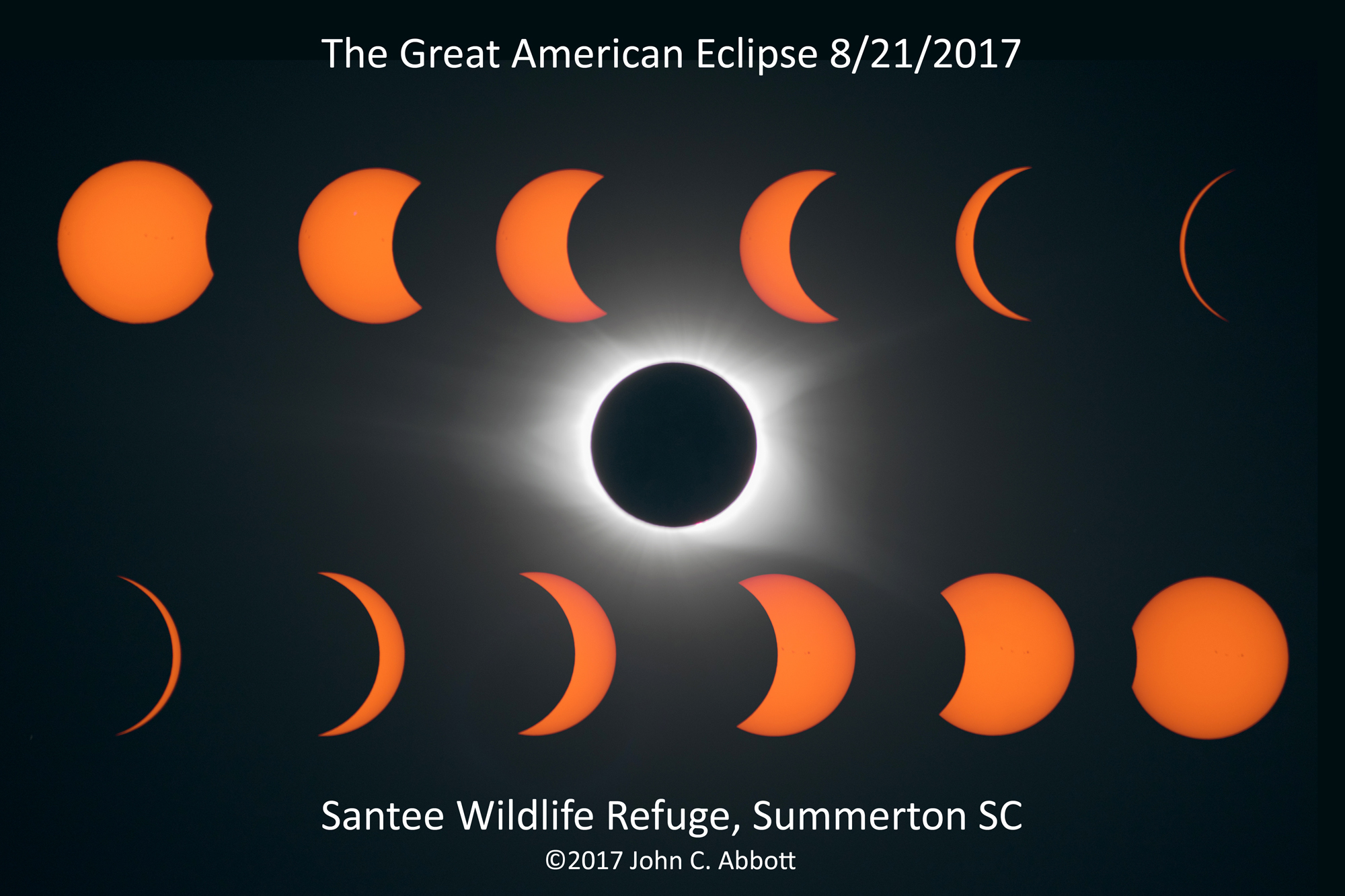 All of the "experts" will tell you that seeing a total eclipse is a life changing experience. Don't believe it! Words cannot describe the experience - it was amazing the hear 2,000 people whistling, clapping and cheering as totality occurred. I had a list of things that I was going to do to maximize the photographic opportunity. As soon as I glimpsed up and saw the covered sun, my brains went to my toes and I was lucky to manage to get a few shots of the diamond rings and the corona. I cannot wait for the next one in 2024! 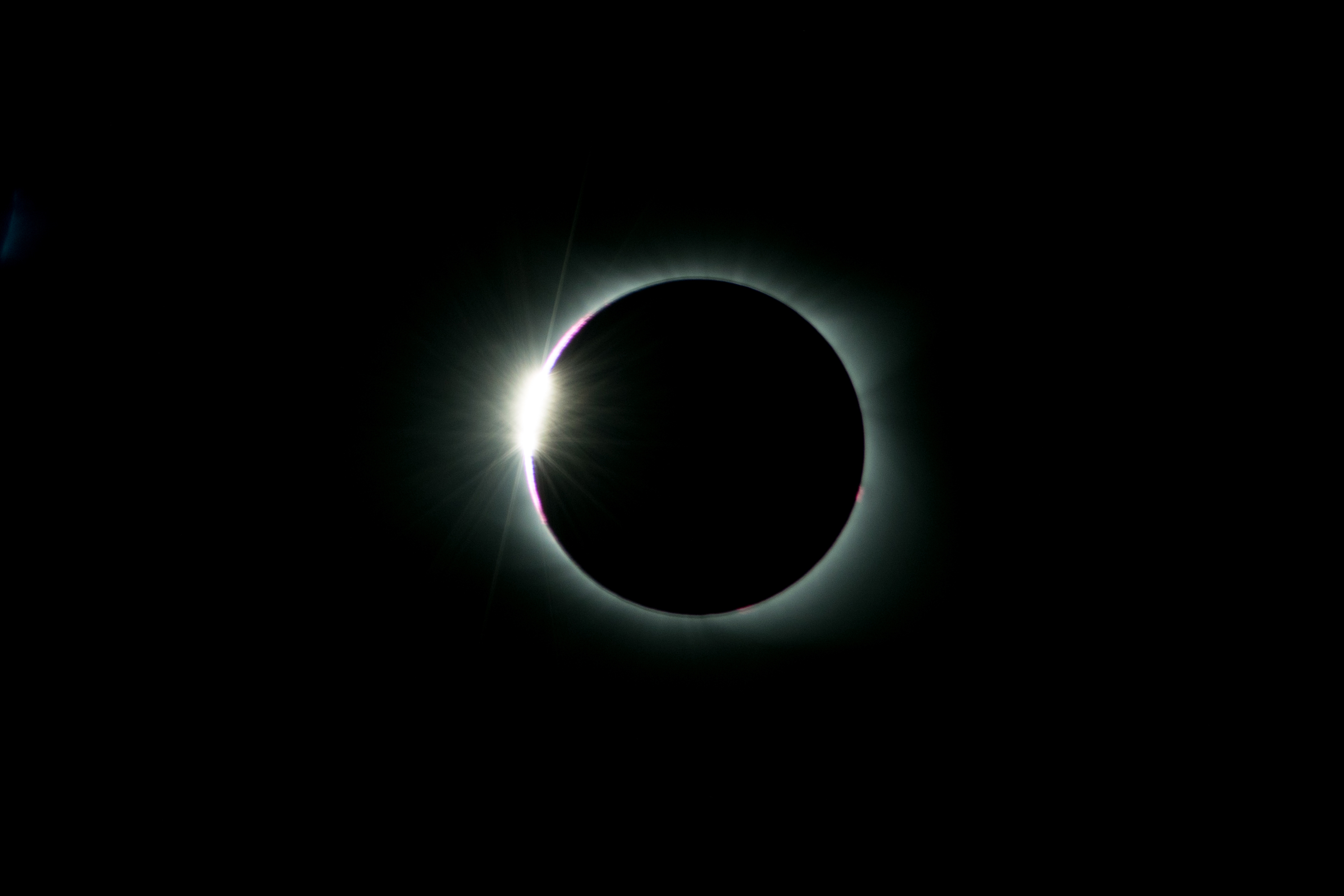 This is the first diamond ring, which appears just before the sun is obscured. 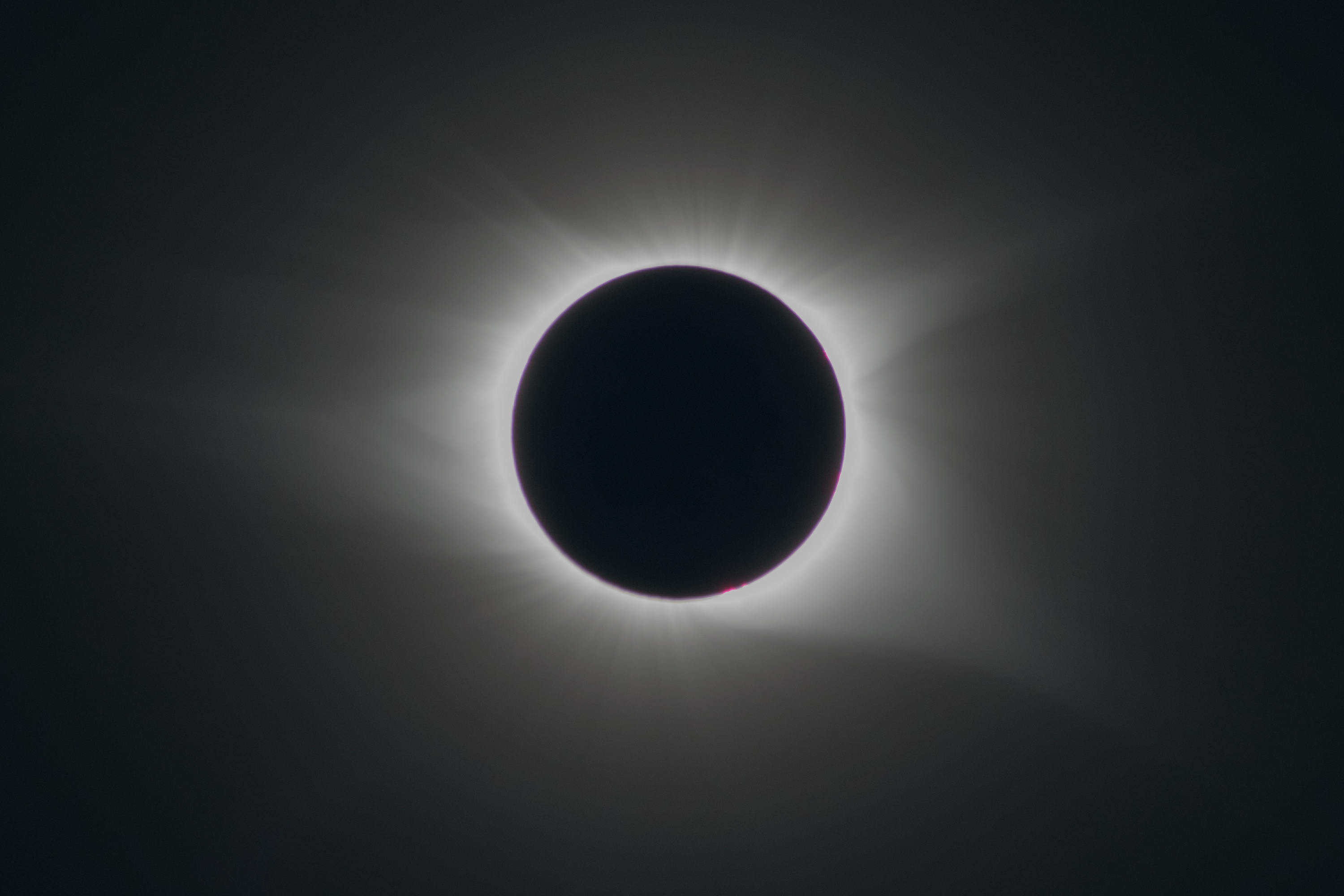 This is the totality - the sun is totally obscured by the moon and the corona is visible. 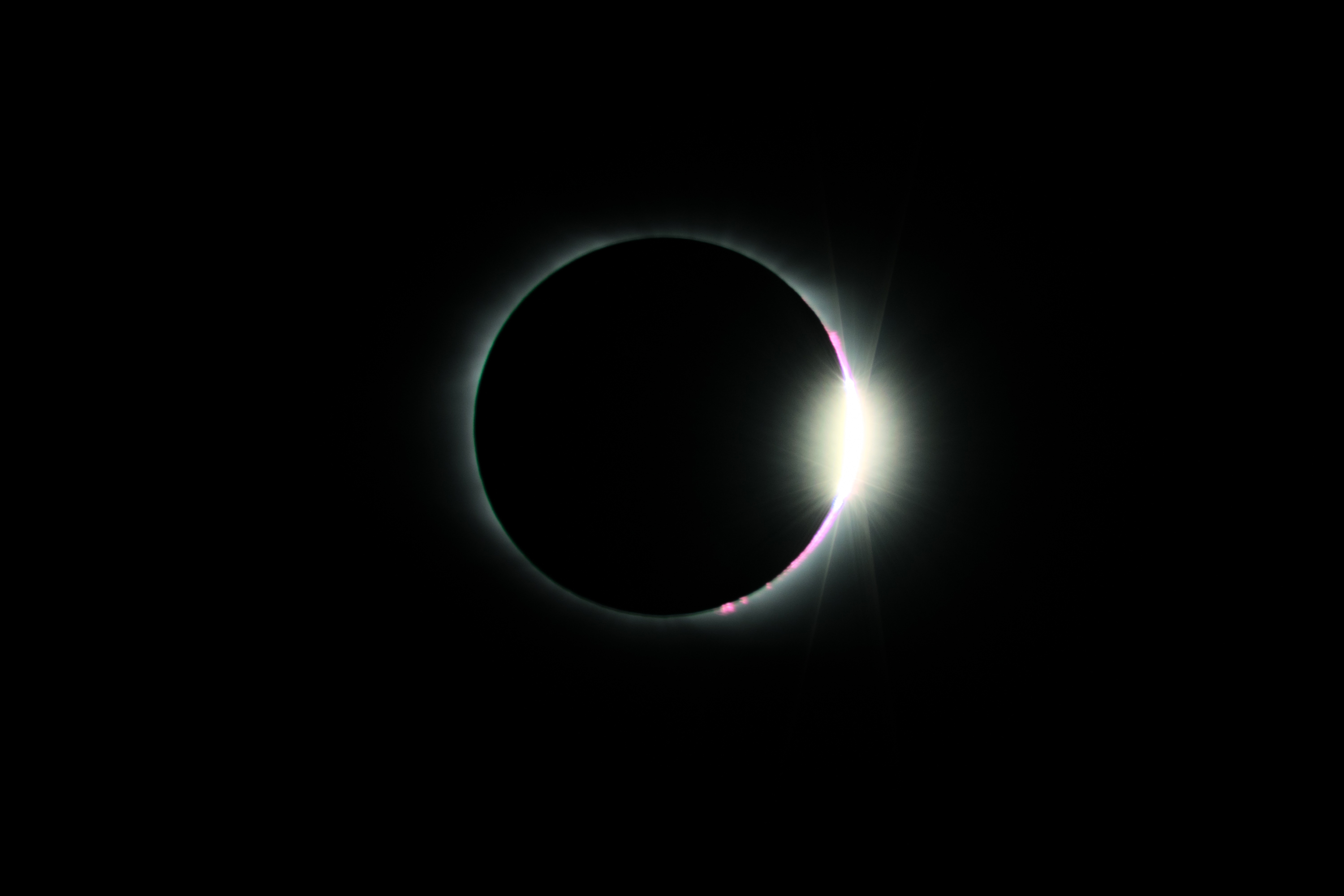 This is the second Diamond Ring, which appears at the last moment of totality. 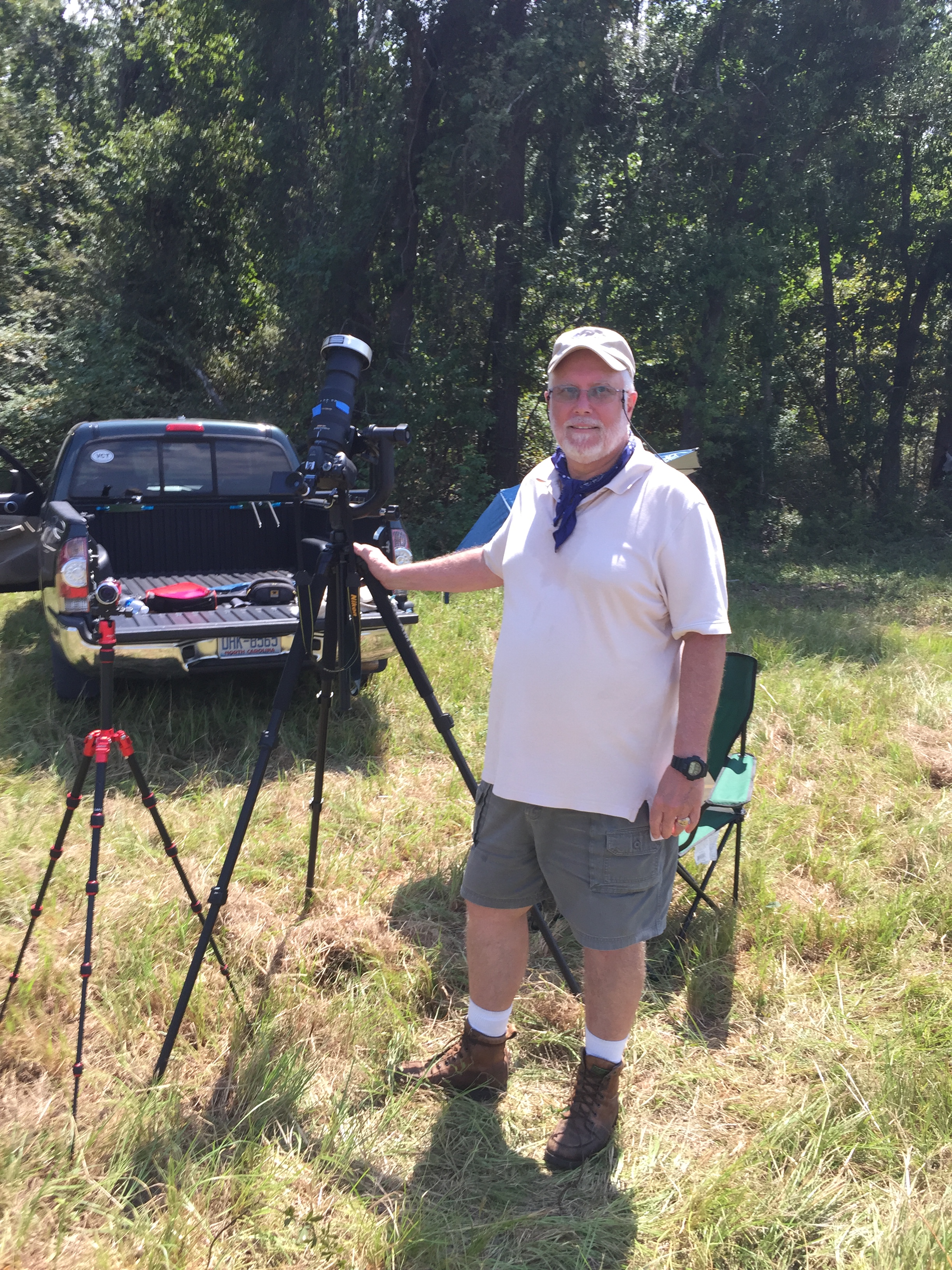 Ya gotta have a selfie of the event to make it "official", so here it is - sort of: